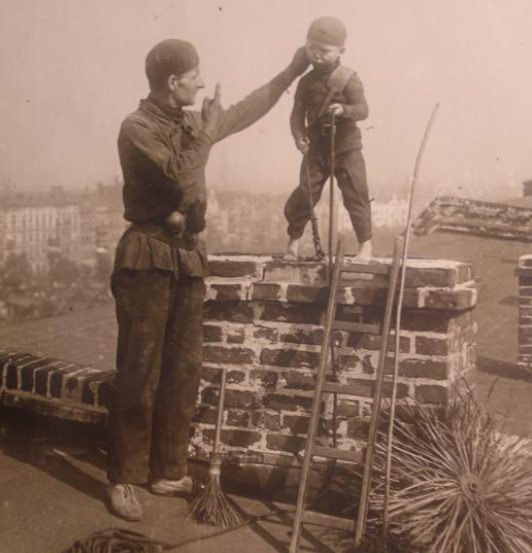 IT’S not a cheerful subject – terribly morbid in fact but nonetheless fascinating.
People have been discovered dead after getting stuck in chimneys and it’s nothing new. And they got stuck for all sorts of reasons  – child sweeps, burglars, lovers, missing people.

Boy and girl chimney sweeps of yesteryear faced this issue daily as a very real danger. Master sweeps would make them climb up the insides of chimneys to rake out the soot and other debris. It was hazardous work for the youngsters, aged 3-plus, who had to navigate the twists and turns, and tiny spaces inside the chimneys of the Georgian and Victorian eras.
History recounts an inevitable record of children panicking inside the flues, getting stuck and dying.
Benita Cullingford recalls just such an instance. In her ‘British Chimney Sweeps: Five Centuries of Chimney Sweeping’ she writes:-

“On July 7th 1877, The Leeds Mercury reported the death of a sweep in a chimney at Thornton. At about 10am on Tuesday morning the young boy had been cheerfully employed sweeping a chimney, when his brush became lodged in the flue. Fearful of his masters anger he remained in the chimney. His master, J. Holgate, sent another apprentice up to get him but the boy climbed out of reach. The enraged Holgate swearing he would cut him to pieces lit a fire in the grate – to no effect. The apprentice was sent up again with a rope, which he tied to the boy’s leg. Holgate tugged the rope down a few feet and secured it to the grate. He then climbed up to the boy himself and stayed with him about five minutes. On returning he declared the boy’s feet and thought he was dying. The chimney was dismantled at around 3pm but it was too late. The boy had stuck fast in a narrow section of the flue and died. Holgate was tried, found guilty of manslaughter and confined to York Castle. At the next Assizes, Holgate was acquitted. Medical opinion had decided that his apprentice had died of suffocation and not through any wounds or bruising found on his body.”

Fortunately the cruel days of child sweeps are over but adults too have got stuck in chimneys.

There have been a number of examples in the USA in the past 50 years. Here’s a poignant example: Joshua Vernon Maddux, aged 18, went missing in Colorado Springs on May 8 2008. His body was found seven years later inside a chimney in an abandoned cabin a mile from his parents’ home. Building contractors made the discovery when they began to pull apart the building.

Another tragedy was Californian doctor Jacquelyn Kotarac, aged 49, whose body was found two feet above the top of a fireplace opening. She had been trying to ‘force her way’ into her boyfriend’s home, according to police. The boyfriend had left the home to avoid an argument. Her remains were later discovered by a house sitter.

More recently here in the UK, Kevin Gough, alleged to be a serial burglar, attempted entry into a solicitors’ premises in Derby in early 2013, Staff at the firm reported a horrible odour and infestation of flies. A pest control company discovered the remains, which were believed to have been in the chimney for a number of weeks.
We’d advise that you never ever try enter a chimney space unless you have specific training.

If you feel the need for more grizzly “stuck in the chimney” stories, you can find some here: https://www.ranker.com/list/people-who-got-stuck-and-died-in-chimneys/laura-allan