Home > Other > The tale of a chimney sweeper war hero

The tale of a chimney sweeper war hero 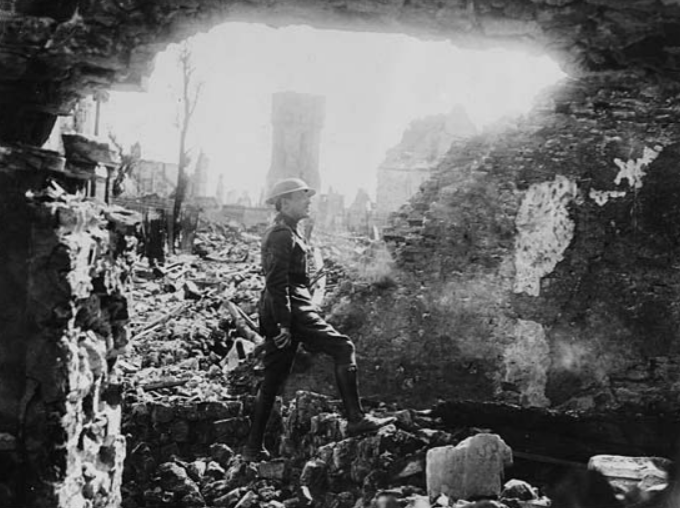 Bethune was destroyed in the Great War

WHERE do we even begin to find out how many chimney sweeps died in the First World War?

The Commonwealth War Graves Commission says it is difficult to ‘collate that data’ because understandably ‘our records very rarely have the person’s pre-war trade as it was not relevant to their commemoration by us’. Yet the fact is that thousands of chimney sweeps laid down their brushes to pick up a rifle on behalf of King and country during the battles of 1914 to 1918. Wives of the sweeps often had no choice but to cover the sweeping rounds,until their husbands returned. Many of them did not.

Intriguing… a search of the Commission’s records, using ‘chimney’ as a search term, chances upon a single casualty recorded by officialdom, with no photo image of the deceased: George William Wragg from Sheffield. A chimney sweep by trade. Bethune Town Cemetery (above) is tucked away in the town of Bethune in Pas de Calais, northern France, just 29km north of Arras.  That’s  the final resting place of Private no. 27716 George William Wragg. He died aged 19, on April 9 1918. The inscription on his grave reads: ‘Death divides but memory clings to a primrose with fallen leaves’.

George was born in Sheffield on April 19 1898 and lived at 74 Wellington Street in Sheffield. Records imply that his father was also a chimney sweep and it’s possible the Wraggs had a history of chimney sweeping as an employment.

George was in the 4th Battalion of the York and Lancaster Regiment and served with the British Expeditionary Force after he enlisted in May 1917. He did his duty on the battlefront in France and Flanders from July onwards.

He was also a storekeeper in a Church Army Hut. After his death, De Ruvigny’s Roll of Honour quotes the Commissioner of the Church Army paying tribute to George: “He had been a very faithful servant of the Church Army. He was always hard-working and had won the respect of all. You may be proud of him.”

The Church Army has been unable to give details of the ‘specific tasks George would have undertaken as a storekeeper’ and a spokeswoman said there was no recorded information about George. She referenced the fact that the recreation hut (example pictured above), in which George was involved, provided respite for soldiers involved in bloody warfare. In fact, there was a point where about 200,000 men were welcomed in the huts each day. Space would be given to them to have tea and biscuits, take time for quietness and reflection, and read or play games. A film was shown once per week and there were weekly services. George would have been involved in ensuring the hut served the men well. No doubt his background as a chimney sweep, giving professional customer service, helped him in his duties. The Church Army was involved in helping on the war front in other ways such as running ambulances, kitchen cars and mobile canteens. Perhaps George was involved in such work? He would almost certainly have been involved in manual duties, such as trench-digging, since he was attached to the Labour Corps. What happened on April 9 1918 – the day that George died? Geoff Goodyear, a First World War history enthusiast based in West Sussex, suggests that George could have been caught-up in Operation Georgette, part of the Kaiser’s Spring Offensive of 1918, which was launched that day. Bethune town centre endured a terrible bombardment. A week after George’s death the town was the centre of an immense battle.

“By the end of April the Germans had suffered horrific casualties,” Geoff says, “and the attacks faltered also due to long supply lines. The Americans joined-in around this time.”

Derek Lynch, in his book ‘Chariots of the Gospel’, says that Church Army huts were located all over the warzones of France and Belgium. He writes: ‘By the Spring of 1918 the Church Army had about 200 centres under shell fire on the Western Front. 100 of them were destroyed in the German advance which began in March of that year.’ It is a realistic conjecture that the hut where George served was one of those destroyed.

De Ruvigny’s Roll of Honour says that George died of ‘wounds received the same day by the bursting of a shell’.

This is just a snapshot about the life of a professional chimney sweep, George William Wragg, who died at a young age. This was the fate of many young tradesmen caught up in events which were almost too immense to understand. George is commemorated on the Sheffield City Council’s Official Roll of Honour.

Thank you to the Commonwealth War Grave Commission, the Church Army and Geoff Goodyear for helping with research for this article. Information written about George Wragg is based on evidence as currently known and is not exhaustive.