How can spiders be deadly in chimneys? These are not some exotic species that hitched a lift in a box of bananas. They are common spiders, found all over the country. The cobweb in the picture was blocking a chimney pot. The odd colour is brick dust drawn up the chimney from below during remedial work. Cobweb can act like a filter, catching dust and blocking the chimney.

The video below shows a mass of cobwebs which had completely blocked the flue above this wood burning stove. Blocked chimneys can be dangerous!

Guild of Master Chimney Sweeps chairman Lawson Wight said, “This is a huge amount of cobweb which built up over the summer months.  A blocked chimney from a fire or boiler can be very dangerous as it can let poisonous gasses in to the property.”

Lawson added: “Chimneys can be a great environment for spiders. We sometimes hear customers saying they don’t think the chimney needs sweeping because they didn’t use it much last year. Cobwebs are just another good reason to call your local professional sweep.”

Visit www.findachimneysweep.co.uk to search for your local professional chimney sweep. 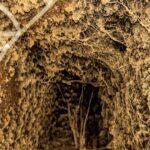